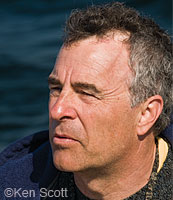 Jerry Dennis, who grew up near Traverse City, has made his living since 1986 writing books about nature and the outdoors and essays for such publications as The New York Times, Smithsonian, Audubon, Field and Stream, Wildlife Conservation, and National Geographic Traveler. In 1999 the Michigan Library Association presented him with its Michigan Author of the Year Award, the foremost literary award in Michigan.

Dennis' books, many of them illustrated by Traverse City artist Glenn Wolff, have been translated into five languages. His most recent book, The Living Great Lakes, is the winner of the Sigurd Olson Nature Writing Award and the Great Lakes Culture Award. He is currently at work on a chronicle of a year spent living in houses on each of the Great Lakes.

The Windward Shore: A Winter on the Great Lakes (Hardcover)

The Windward Shore: A Winter on the Great Lakes (Paperback)

The Living Great Lakes: Searching for the Heart of the Inland Seas (Paperback)

From a Wooden Canoe: Reflections on Canoeing, Camping, and Classic Equipment (Paperback)

A Place on the Water: An Angler's Reflections on Home (Paperback)